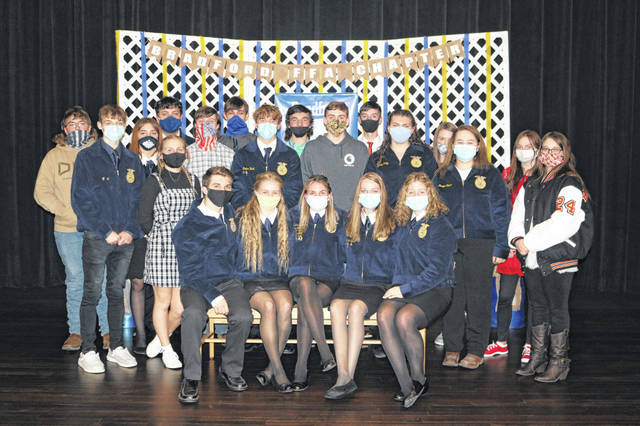 BRADFORD — The Bradford-UVCC FFA held its yearly FFA banquet on Thursday, March 18. There were 31 guests and 22 members present. Everyone in attendance wore masks and sat with their own families to remain spaced out and safe. The eight members on the retiring officer team followed all the guidelines to make sure they would be able to host a banquet this year.

The special chapter awards they recognized were star freshman: Devon Hawes, star sophomore: Scout Spencer, star junior: Alexis Barhorst, and star senior: Justin Bryan. All of these individuals showed hardwork and commitment to their chapter all throughout the past year and stood out to the chapter advisor.

To be eligible to receive a Greenhand Degree, a member must be enrolled in agricultural education and have satisfactory plans for a supervised agricultural experience (SAE), learn and explain the FFA creed, describe and explain the meaning of the FFA emblem and colors, demonstrate a knowledge of the FFA code of ethics and official dress, demonstrate a knowledge of the organization, and have access to the official FFA student handbook. There were 18 recipients of the Greenhand Degree this year: Izabella Painter, Tucker Miller, Savannah Lingo, Ben Kitts, Devon Hawes, Peter Webb, Emma Smith, Max Shafer, Brant Mills, Quentin Lear, Emily Huff, Brooke Philips, Macenzy Hemmelgarn, Kaden Clack, Alexis Biddlestone, Owen Beachler and Halley Petty.

To be eligible to receive a State Degree, a member must have a Chapter Degree, be an active FFA member for at least 2 years, satisfactorily complete at least 2 years of agricultural education, serve as an officer or complete 10 hours of procedure of parliamentary law or given a six-minute speech relating to agriculture, participate in the planning of some sort of chapter activity, participate in at least 25 hours of community service, and complete 300 hours in excess of class time or earn/invest at least $1,000 in an SAE. The Bradford FFA had one recipient of the State Degree this year, a junior, Alexis Barhorst.

The chapter then recognized members who competed in Career Development Events (CDEs). The members who competed in various contests include Molly Clark, Isabella Hamilton, Alexis Barhorst, Isabella Brewer, Devon Hawes, Scout Spencerand Quentin Lear. Afterwards, they announced the Honorary Chapter Degree recipients. The chapter selects individuals who benefited or had a major impact on the success of the chapter. The two people chosen this year were Emily Clark and another person who has not been announced yet because they could not attend the banquet.

Bradford Junior High and High School principal, Matt Triplett, attended the banquet and gave remarks on the importance he sees in FFA and the program they maintain at their school. Despite power outages throughout the banquet due to bad weather, the chapter managed to host a really great banquet for members and parents. They finished their banquet by announcing and introducing their new officer team for the 2021-2022 school year. The positions were introduced as the following: Alexis Barhorst: president, Isabella Hamilton: vice president, Molly Clark: secretary, Devon Hawes: treasurer and Isabella Brewer: reporter. The Bradford FFA is looking forward to a great year and ended this past year with a great banquet.