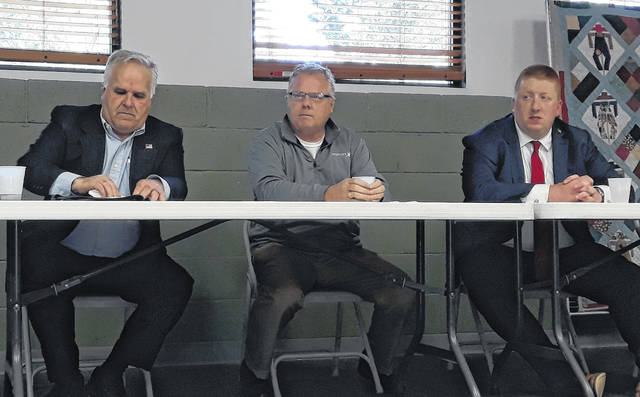 GREENVILLE — Although elections are just around the corner, it is never too early to review who is on the ballot. The Darke County Republican Women’s Club (DCRWC) held its monthly meeting Monday night which included a “Meet the GOP Primary Election Candidates” panel.

The Ohio Primary, set for Tuesday, May 4, will see four candidates on the Republican ballot vying for three open “at-large representative” Greenville council seats, with candidates for Greenville Council President and Greenville Treasurer running unopposed. The three “at large” candidates receiving the most votes will run in November.

John Baumgardner, candidate for president of the Greenville City Council, is a Darke County native who has lived in Greenville since 1964. He is a married father of four, who has served in the corporate sector for 34 years in numerous roles, and is currently a national accounts manager for Aramark Uniforms Services. Baumgardner also owns several businesses in Greenville and has a keen interest in the revitalization and development of the downtown Greenville Business District. He has served on the council since 2004, taking a brief hiatus in 2014 to 2015, with reappointment to council again, in 2016. Baumgardner currently serves as the 4th Ward Greenville City Council representative.

Jeff Whitaker, candidate for Greenville City Council, is a married father of two daughters, two grandchildren, who calls the City of Greenville “home.” A native of Bellville, Ill., St. Louis, Mo., and Florida, Whitaker has a keen interest in seeing Greenville grow and thrive, bringing his years of professional and business experience to each council meeting. Whitaker has enthusiastically supported the Fourth Street and Sweitzer and Wagner Avenue widening projects, as well as the revitalization efforts within the downtown Greenville business district. Whitaker currently serves as a Greenville City Council at-large representative.

Brian Brown, candidate for Greenville City Council, is a native of Greenville’s south side, having attended the old South Elementary School and GHS, with fond memories of the South Park Recreation Center and the Boys and Girls Clubs of Greenville. Married with three young children, Brown is a certified paramedic with 20 years of experience, and is the Operations Manager for Spirit Medical Transport. He currently serves on Greenville’s Planning and Zoning Commission and the Architectural Review Board, Partnership for Patients through Wayne HealthCare, and the Advisory Board for Village Green.

When asked what top three issues are of greatest concern to Greenville residents, each candidate expressed their views.

Baumgardner cited jobs and job growth as the most important factor, with zoning, critical infrastructure, and utility upgrades as important for the city’s long term growth. Baumgardner also said that as a resident of Greenville, he believes cleaning up some of the rundown neighborhoods would make a positive impact on the community-at-large. “I live at Third and Ash, and there are so many properties in disarray. We must get people to take pride in their community,” said Baumgardner, adding, “Maybe get a little tougher with code enforcement.”

Whitaker cited water and sewer infrastructure as among his top concerns, with a particular attention to repaving of Greenville’s streets and roads — an issue over which some citizens have voiced concerns, saying that it is taking too long to complete. Whitaker also believes that cleaning up the city is a top priority, citing the council’s current efforts to develop a comprehensive nuisance abatement program. Whitaker also believes that “civic pride” among residents is an issue of utmost importance. “I have had the experience of living in other places,” said Whitaker. “Many people complain about living in the city, but I think Greenville is a great place to live.”

Brown cited citywide clean-up, planning and zoning concerns, and critical infrastructure as his “top three” issues. “It’s super frustrating to see the graffiti,” said Brown. “We are trying to find ways to help our youth grow and expel this energy. Help them find other outlets.” Regarding zoning concerns, Brown wants to address the clean-up of certain neighborhoods and work on maintaining improvements. “Sofas don’t belong in the backyard,” said Brown. “They belong in a house. We need to work on finding positive ways to get people to comply.” Critical infrastructure is also of concern for Brown. “The water thing is a ‘hot topic’ right now. In the event of an emergency, if you tell people that we only have a 12-hour available supply, [then] you really only have a 6-7 hour supply, because people will begin to panic and hoard water, like they did with toilet paper early in the pandemic…Now, that is a concern!”

One attendee asked the candidates to express their views on the “Chillz” building and the Darke County Court’s plan to use the property at 331 S. Broadway to provide office space and work-release classes designed to teach ex-convicts applicable life skills. “I have not run into one person who thinks this is a good idea for the city and citizens of Greenville.” said Baumgardner, adding,”They are running businesses out of Greenville.”

“The council has already signed a letter [of opposition] to Judges Hein and Monnin about the Chillz building being so close to The Final Bow and other businesses. The judicial branch serves the public as much as the legislative and executive branches of government…Hear us!” said Whitaker. “[Although] there are other options available to him [Hein], it’s almost as if he’s doing it because he can.”

Another attendee asked specifically about the graffiti problem which has been ongoing in certain areas of Greenville, most notably on public park property. “I always say there are no consequences any more, whether it’s breaking in [to someone’s property] or graffiti, “said Baumgardner, adding, “Perhaps there needs to be a little more accountability through the court system.”

“I want to see more patrolling to discourage the graffiti ‘artists,’” said Whitaker. ”And also more parental responsibility in making restitution for having to clean up the vandalism.”

“More surveillance at the parks at ‘random’ times would help,” suggested Brown, “The lighted path on Park Drive, where the two lagoons are, is a great start.”

Each candidate offered a final comment. “We have multiple land deals coming to improve the city. We need to do a better job of talking about the good stuff, “said Baumgardner. “Having a positive attitude is important to being a successful community.”

“It would be an honor to serve again on the City Council,” said Whitaker. “Anything we can do to improve the city, the business community, we will do it — provided it is sound, financially. “

“I am younger, but I would love the opportunity to make Greenville an even better place to live and grow, for my children and other children,” said Brown.