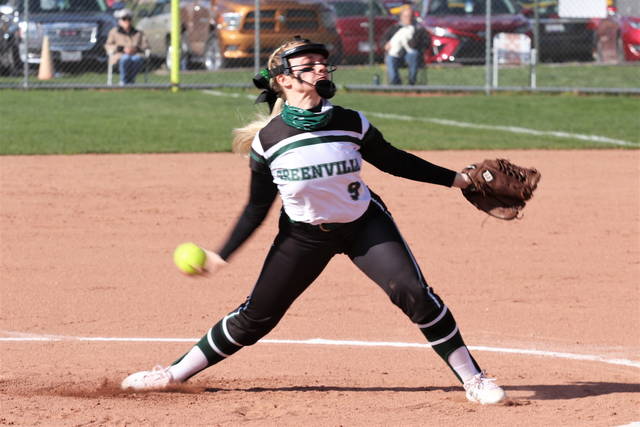 “In big time games big time players come to play and today Grace Shaffer stepped up, threw a great game but yet three or four great web gems around her there in the outfield making some plays,” said Greenville coach, Jerrod Newland. “Grace and Susie Blocher (catcher) went at it pitching and catching and Coach Ruble had a great plan today on the mound. We attacked it and bottom line 10 zip and moving on.”

Tippecanoe rolled into town with a perfect 6-0 Miami Valley League (MVL) record to face the Lady Wave – owners of an 8-0 perfect MVL mark of its own.

The Lady Red Devils entered the game outscoring its opponents 115-55 on the 2021 season while the Lady Wave came into the contest outscoring the opposition by a 176-28 count.

The first two innings of play had the game living up to its billing of the only remaining undefeated teams in both the Valley and Miami sides of the division with the teams playing to a 0-0 score.

Inning No. 3 had the Lady Wave breaking into the scoring column with Nyesha Wright legging out a one-out infield single, an Alaina Baughn single to right and a RBI single off the bat of Susie Blocher scoring Wright with the game’s first run.

A walk to Skylar Fletcher and a Kenna Jenkinson run-scoring sacrifice fly had the Greenville girls leading 2-0 after three complete.

Shaffer set Tipp down 1-2-3 for the fourth consecution inning in the top of the fourth bringing the Lady Wave to the plate for its half of the inning.

Keira Beavins led off the fourth with a single to left, Ashlynn Zimmer followed with a single, Savannah Leach reached by way of an error loading the bases with no outs.

Wright coaxed a run scoring walk, Zimmer raced home on a Tipp error and Baughn knocked a two run single giving the Lady Wave a 6-0 advantage with no outs.

Blocher followed with a double to left, Fletcher legged out a RBI bunt single down the third base line, Jenkinson drilled run-scoring sacrifice fly to left and Bri Fellers hit a RBI groundout to first giving LWSB a 9-0 lead with four innings in the book.

The Lady Wave put the “W” in the win column in the bottom of the fifth taking advantage of a leadoff Wright walk, a Baughn single to left and a Fletcher RBI walk-off sacrifice fly to right advancing the Lady Wave to 9-0 in MVL action – the league’s lone undefeated team in conference play.

“Five-inning ballgame and two good teams squaring off,” Coach Newland stated. “Today was a fun day at the stadium. Big league win and I’m sure Monday at Tipp will be a totally different story.”

With the win, the Lady Wave has outscored its opponents 186-28 and move to 14-1 on the year while currently riding an eight game win streak.