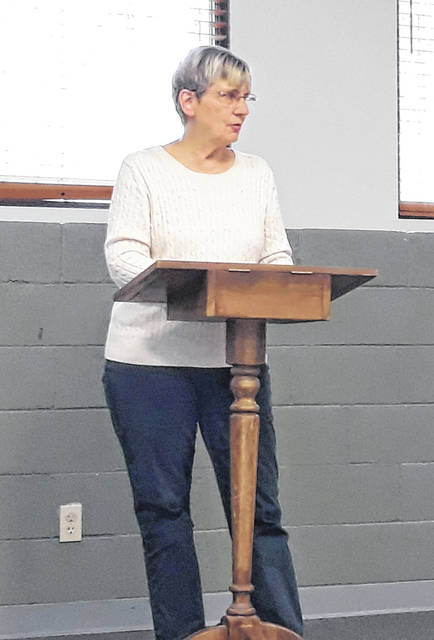 GREENVILLE — The Darke County Republican Women’s Club (DCRWC) held its May meeting last week, and hosted Darke County Auditor Carol Ginn, who presented information about her office and invited questions from the audience.

Ginn took to the podium and introduced herself, noting the changes which have taken place in the Darke County Auditor’s office since her arrival over 35 years ago, including the manner in which the county conducts property appraisals. In earlier times, during an appraisal year, the auditor’s office would dispatch appraisers to take physical measurements of the properties. Today, in 2021, appraisals are conducted through fly-overs, aerial drones and mapping techniques.

“It is a far more effective and efficient way to do the appraisals,” said Ginn.

Ginn highlighted key accomplishments achieved by her office, noting that when she took office, the county debt was $7 million, and it is currently only $4 million. Ginn also discussed Darke County’s share of the 2020 COVID relief funds, which her office disbursed to taxing districts throughout the county, most often used to support fire departments, and update safety and hazardous materials equipment.

Ginn also mentioned that Darke County’s share of the COVID relief funds were used to upgrade the Sheriff’s Office and the Michaels’s Group Home showers, provide new web cams for judges, laptops, office equipment and salary reimbursements for those who worked from home during the pandemic shutdowns, in addition to public safety items, such as hands-free thermometers, hand sanitizer and stations, as well as the purchase of a stand-alone building for the Concealed Weapons Division of the Sheriff’s Office.

Current COVID relief funds from the American Relief Act earmarked for Darke County’s specific use is $9 million, which must be spent by Dec. 31, 2024.

The DCRWC is a multi-generational, multi-cultural organization providing the structure and support for political activists to learn, engage, and flourish. The club is chartered by the National Federation of Republican Women and is a member of the Ohio Federation of Republican Women. The DCRWC meets regularly on the first Monday evening of each month, with an optional meal offered. For more information, visit www.darkegop.org/womens-club.html or email President Jaime LeVeck [email protected]