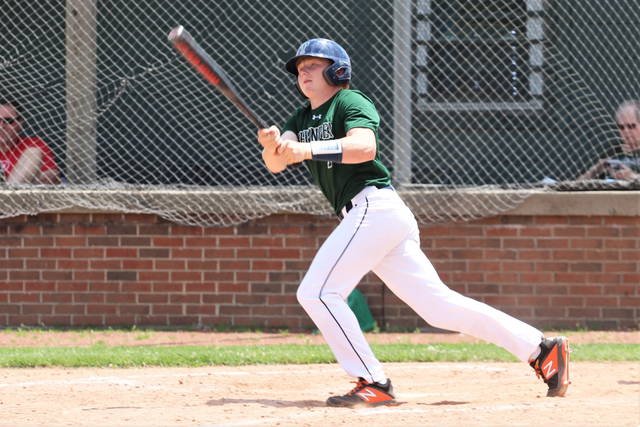 SPRINGFIELD – Greenville American Legion Post 140 19U baseball team battled back from an early 5-run deficit to earn an 8-7 road win over Springfield Armoloy.

“After starting out rough, our guys didn’t let down and battle back,” said Post 140 coach, Chad Henry.

Springfield opened up scoring 4-runs in the bottom of the first-inning and tacked on a run in its half of inning No. 2 to lead 5-0 with Post 140 coming to the plate in the top of the third.

Back-to-back walks to Tyler Beyke and Jarod Lee and a Will Cook home run to center plated three Post 140 runs to make it a 5-3 Springfield lead.

Greenville used a one-out single off the bat of Jack Kletzly and back-to-back Colton Francis and Carson Bey hit batsman to load the bases.

Springfield came right back with 2-runs to go up 7-5 before Greenville would pull out the 8-7 win.

“After overcoming the 5-run deficit Springfield immediately scored two to go back up,” Henry said. “For us to turn that back around again just speaks to the resiliency of the guys in that dugout.”

Alex Kolb earned the win allowing no hits over one-inning of work. Will Cook picked up the save recording the final 3-outs of the game.

“Hunter Reagan played his first game for us this season and really got it done with the bat,” Henry noted. “Straight out of a sectional title at Union City he comes in to go 3-4 – all seemingly in crucial situations.

“All our starters had a hit today except for one, and that one drove a ball deep enough into centerfield to score the game winning run,” added Coach Henry. “It goes to show it’s not what you’ve done, it’s about what you can do.”