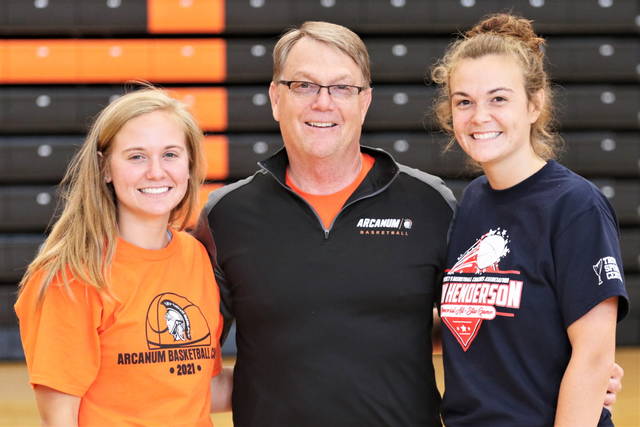 ARCANUM – McEldowney, a name synonymous with winning will not be going away soon as the family of four daughters, a mom and a dad continue to enjoy playing, watching and coaching basketball.

Sisters Kami and Caitlin McEldowney, the daughters of Holly and Roger McEldowney will be together once again when the Indiana University East Lady Red Wolves basketball team takes the court for the 2021-2022 college season.

Kami, an incoming senior played for NCAA DII Urbana University before the university closed its doors and incoming sophomore Caitlin played for the Edison State Lady Chargers before transfering to IU East for the upcoming season.

“It’s been a dream because since the state tournament we thought that was the last time we were going to play together,” said Kami. “It wasn’t planned or anything but at the last second it happened and I am grateful it did.”

“I’m really excited about it,” said Coach Roger McEldowney. “Some of the best time we had when they were in high school was when they were playing together in the state tournament – that was a pretty proud moment both in volleyball and basketball.”

“I thought that was probably it after Kami graduated,” Roger added, “and to have the opportunity to see them play together again – I am really excited about it.”

Roger McEldowney, Arcanum varsity boys basketball coach is the father of Kami, Caitlin, Kayla and Cortney and will have a juggling act when it comes to the high school and college basketball season.

“We are going to have a lot of games to go to this year but I love supporting them,” said McEldowney. “I love when they come to our games and support me. That’s pretty special so we have a lot of basketball we’re looking forward to.”

“We laugh about it,,” Holly said of the family’s busy schedule. “With Roger coaching at Arcanum we kind of tease him that he’s the low man on the totem pole because I have to go watch all of my girls and the other two will be coaching, so we’ll get to Roger when we have a chance – but I have to watch the girls first.”

With two daughters already in the coaching ranks there is little doubt before the dust settles, four McEldowney sisters will be filling coaching roles.

“This is what I want to do with my life,” Kami said while helping her father at Arcanum boys basketball camp. “I want to get into teaching, I want to coach and just to see how pasionate dad is makes me so much more passionate in wanting to follow him because he has done this his whole life and seeing that – that’s who I want to be.”

“They have always been around and they are a big help to me during the summer,” Roger said. “They come help me run drills, sometimes they jump in and practice with the guys as well which is good for them and sometimes good for our guys, so I could see them both wanting to coach.”

Holly keeps everything in perspective having dealt with serious health issues.

“Last year the girls would come home and support their dad and the Arcanum team,” Holly said. “They have bonded with those boys and they have become family.”

“We have learned there are things we don’t have that control over and we are starting to assess that a little bit,” added Holly. “We are embracing it and taking what ever opportunities we get and using those. How often can you say that your two daughters are together again and we as a family are still able to support them all and enjoy it – so that’s pretty special to us.”

“It’s going to be an interesting basketball year,” Holly concluded with a smile. “We pretty much have basketball chaos October through hopefully March.”