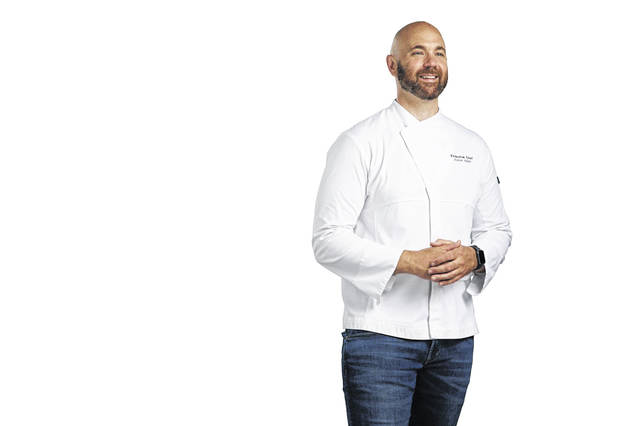 VERSAILLES — Midmark Corp. on Monday announced the appointment of Aaron Allen to its hospitality team as executive chef of Silas at Hotel Versailles.

In his role, Allen will be responsible for all kitchen functions and the training and development of teammates. He will also oversee menu planning for an anticipated boutique hotel restaurant named Silas and event space called 1819 Room in downtown Versailles, as well as Midmark’s corporate café. Leading the Silas culinary team, Allen will develop processes and menu items based on local sourcing and a farm-to-table approach.

Allen brings more than 14 years of culinary experience, most recently serving as executive chef of Coppin’s Restaurant and Bar at Hotel Covington in Covington, Ky., and executive chef for the S+P Restaurant Group in Pittsburgh, Pa. Originally from Dayton, Ohio, Allen earned a bachelor’s degree from Wright State University and got his culinary start at Rue Dumaine in Dayton, Ohio, where he worked with James Beard Award winner, executive chef Anne Kearney. His career also included supervising the operations of DANIEL, a world-famous, Michelin two-star restaurant, working closely with owner Daniel Boulud in New York City. Prior to this position, Allen held roles at Nemacolin Woodland Resort and The Inn at Dos Brisas, among others.

“We are thrilled for Aaron to join the hospitality team at Midmark and to welcome him back to the area,” said Jack Olshan, managing director of Hotel Versailles, Midmark. “With deep experience in hotel environments as well as standalone establishments, Aaron brings a strong commitment to preparing exceptional cuisine, along with a demonstrated passion and creativity for the culinary arts. We look forward to delivering a spectacular culinary experience for our customers and guests with Aaron at the helm.”

In December 2020, Midmark announced its plans for a 30-room Hotel Versailles, and a new restaurant Silas, named for the founder of Versailles. The new 1819 Room, which will accommodate up to 200 guests, will offer a premier event space to the surrounding community.

Allen will uphold the integrity of the food and guest experience of the culinary spaces at these facilities, along with creating cuisines of the highest caliber for special occasions such as corporate events, weddings, parties and banquets.