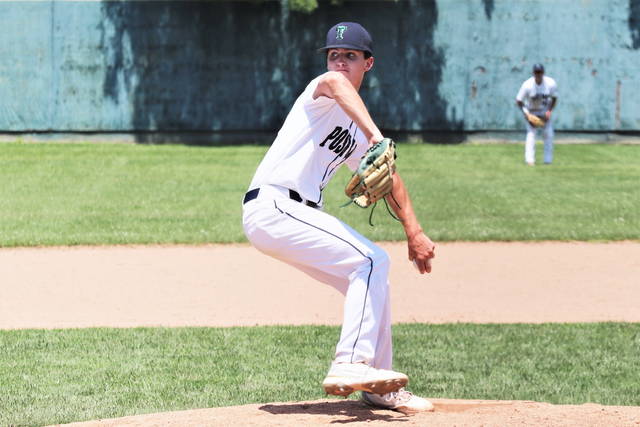 Greenville second baseman, Colton Francis continued to play following a collision with a base runner at second base while pacing Post 140 with two-hits in the win.

“The performance Colton Francis put on today is why I coach,” said Henry. “We hope his x-rays come back negative on his hand, but to do what he did after the injury is out of the world.”

Trailing 4-0 heading into the bottom of the seventh, Stephens led off with a hard grouder to shortstop followed by a strikeout. Alex Baumgardner singled to left moving Stepens to second.

Hunter Reagan drilled a line drive single to center loading Post 140 bases. A strikeout had the Greenville team staring at a 4-0 deficit with two-down and no more outs to give.

Carson Bey sent a run home by way of a Piqua error to trail 4-1 followed with a two-run single to left off the bat of Colton Francis for a 4-3 score bringing a Piqua pitching change to the mound.

With Greenville’s lone base runner, Bey standing at second, Post 140 got back-to-back hit batsmen, the first with Jacob Longenecker taking first and the second to Wyatt House to load the bases.

Stepens stepped to the plate and watched four straight balls sail by to give Greenville Post 140 a walk-off win and advance in tournament play.

Alex Kolb started the game for Post 140 with the southpaw allowing five hits and three earned runs over four and a third innings while striking out ten.

Hunter Reagan earned the win for Greenville with the right hander surrendered no-runs on three-hits over two and two-thirds innings while striking out two and walking one.

“Our pitching and defense was really good today – just struggled at the plate,” Coach Henry stated. “They just hate my blood pressure and love giving me a heart attack every game.”

“Hats off to Piqua and Ivey pitched an unbelievable game,” concluded Henry, “but now I think I’ve seen it all.”