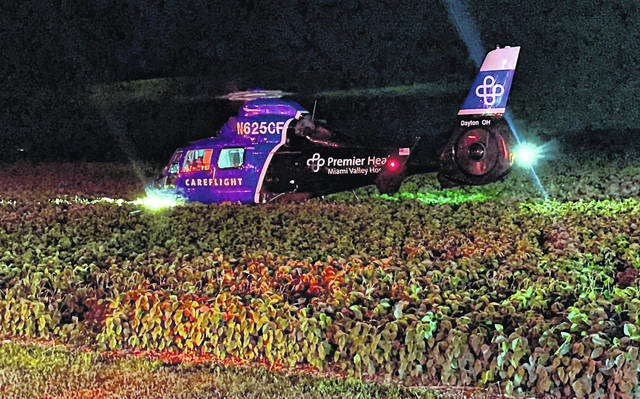 ARCANUM — An Arcanum man was airlifted late Thursday evening after receiving serious injuries in a single-vehicle crash on State Route 722.

At approximately 10 p.m., emergency personnel from Arcanum Fire and Rescue responded along with Darke County deputies to the 7100 block of State Route 722 in reference to an accident with injuries.

According to the Darke County Sheriff’s Office, investigation into the incident revealed a white Ford F-150, driven by Jonathan Nealeigh, 23, of Arcanum, was traveling east on State Route 722 when Mr. Nealeigh failed to negotiate a curve and traveled off the left side of the roadway. The vehicle then continued east through a standing bean field, coming to rest only after striking a tree head-on.

Nealeigh was treated at the scene by Arcanum Rescue for what were described as serious injuries prior to being airlifted to Miami Valley Hospital by CareFlight.