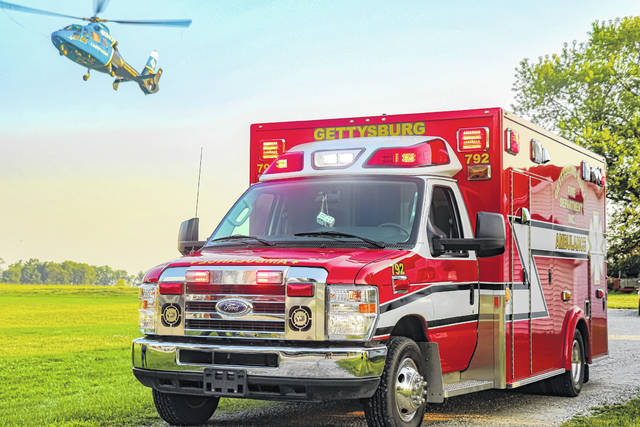 GETTYSBURG — A driver was airlifted from the scene of a single-vehicle crash Tuesday morning after a horse, that had escaped from its enclosure, was struck on U.S. Route 36.

At approximately 7:16 a.m., emergency personnel from Gettysburg Fire and Rescue responded along with Darke County deputies and CareFlight to the intersection of U.S. Route 36 and Arcanum Bears Mill Road in reference to vehicle that struck a horse.

According to the Darke County Sheriff’s Office, a preliminary investigation revealed that a silver Subaru Legacy was traveling in the 6900 block of U.S. Route 36 when it struck and killed a horse that had run across the roadway. The Subaru then traveled off the right side of the roadway near 6971 U.S. Route 36 and continued east crossing over Arcanum Bears Mill Road before coming to rest on the front lawn of a private residence located at 6657 Arcanum Bears Mill Road.

The single occupant female driver of the Subaru was extricated from her vehicle prior to being treated on the scene by paramedics for what were described as serious but non-life-threatening injuries. The driver was then airlifted from the scene by CareFlight to Miami Valley Hospital where her condition remains unknown at this time.

U.S. Route 36 remained closed in both directions at Arcanum Bears Mill Road while deputies conducted their investigation into the incident.