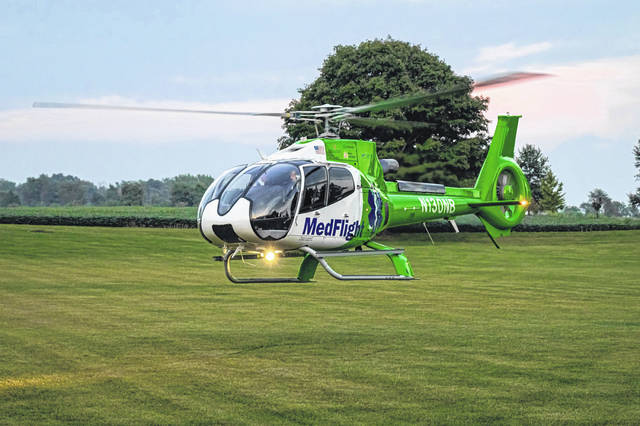 BUTLER TWP. — A Greenville man was airlifted from the scene of a two-vehicle injury crash Friday morning after deputies say he collided into the rear of a semi-trailer on U.S. Route 127.

At approximately 6:51 a.m., emergency personnel from Tri-Village Rescue and the New Madison Fire Department responded along with Darke County deputies and Med-Flight to the intersection of U.S. Route 127 and State Route 503 in reference to an injury accident involving a semi-tractor and trailer.

According to the Darke County Sheriff’s Office, a black 1998 Honda Civic, driven by Nicholas Daniels, 34, of Greenville, was westbound on State Route 503. Daniels failed to notice and stop at a clearly marked stop sign and entered into the intersection where he struck the rear of a trailer being hauled by a white 2012 Kenworth semi-tractor and trailer, driven by Brian Baugh, 42, of Camden, Ohio, that was traveling northbound on U.S Route 127. The Honda Civic then traveled off the right side of the roadway as result of the collision where it came to rest in the ditch.

Daniels was treated on the scene for injuries sustained in the crash prior to being airlifted by Med-Flight to Miami Valley Hospital, where his condition remains unknown. Baugh was examined at the scene and found to be uninjured, refusing any further treatment and transport to a medical facility.