DARKE COUNTY — A best-selling author is among many who have thrown his hat in the ring to become Ohio’s next United States Senator.

JD Vance, a native of Middletown, Ohio, Marine Corps veteran, Ohio State University and Yale University grad, and author of the best-selling memoir, Hillbilly Elegy, is hoping to outpace a crowded field of Republican challengers to claim Sen. Rob Portman’s seat after Portman’s Jan. 25, 2021, announcement that he would not seek a third term in 2022.

Asked why he is running for the seat, Vance told The Daily Advocate the country is facing many problems and he feels he can help solve them.

“We have a crazy southern border, allowing a lot of drugs and a lot of crime coming into our communities. We have companies that do business with the communist Chinese and ship jobs overseas, and we increasingly have American school children that are taught to hate their own country,” he said.

Not having previously held political office, Vance characterizes himself as an outsider.

“I think it’s helpful in an era where our politics have become so corrupted, to have somebody with a fresh set of eyes who is outside the political process, who’s had some success in the private sector,” he said. “I think it’s time to get rid of the career politicians and the people who spend their entire lives caught up in Washington, D.C.”

Vance believes long-time politicians and an embedded federal bureaucracy, as well as many large multi-national corporations, technology firms, and the universities are much to blame for America’s problems.

“The Republicans have to fight against the ‘Deep State’ because nobody else is,” he said.

“There is a permanent leadership class in our country in the private and public sector that doesn’t care about us,” he added. “They’re working against our nation and the people who live here.”

This past week, the Biden Administration hailed an international agreement in which 130 countries, including the United States, have agreed to accept a minimum corporate tax rate of 15 percent. Vance believes this is the wrong direction.

“First, who’s actually going to enforce this?” he asked. “America shouldn’t be giving up our national sovereignty to any international body, especially given how corrupt a lot of the international institutions are. Secondly, who is ultimately affected by this? I really do think it’s a big problem that a local, Ohio manufacturer pays a higher tax rate than Apple or Google. It’s incredibly unfair, and frankly, giving a lot of benefit to our enemies. I’m a big fan of raising taxes on companies that ship jobs overseas and cutting taxes on companies that create jobs here locally.”

Though no longer in office, the influence wielded by former President Donald Trump continues to loom large over Ohio Republicans. Among them, there has been some trepidation towards Vance, as he expressed criticisms about the former president early on during his administration. Vance admitted he was sceptical in 2016, but says he found himself impressed during Trump’s time in office.

“I think he did a very good job, actually cared about his country, and cared about the people who lived in it. I was an enthusiastic supporter of the president’s reelection [in 2020] and I’ve never really shied away from that,” said Vance.

“Trump has opened up a lot of doors, moved our party forward in a lot of very important ways,” he added. “One of the problems we have in our party is people that say they love Trump publicly, and then substantively they stab him in the back. On trade, on bringing manufacturing back from China, on immigration, on our national sovereignty, I think I’m actually closer substantively [to Trump] than anybody else.”

As one of the challengers for Portman’s seat, Vance was asked if he planned to take a more rightward stance than the current senator.

“I’m definitely more conservative than Rob Portman on a few key issues. I think, yes, I will be a more conservative senator than Rob Portman,” said Vance. “I’ve got nothing against Rob personally. I think it’s provided an opportunity for us and our party to actually have an important conversation about what we want to stand for and who we want to send to Washington.”

Vance’s book, Hillbilly Elegy: A Memoir of a Family and Culture in Crisis, written in 2016, discusses the Appalachian values of his Kentucky family and likewise his upbringing in Middletown. It details his family’s history of poverty and his effort to break free from this. A film based upon the book was released in 2020. Vance was asked how his conservative values and his declaration to run for the senate has affected his relationships with the entertainment industry.

“It hasn’t been too bad. People knew what my politics were when the book came out and certainly in the last few years,” he explained.

“The most important right that we have is the First Amendment — the right to free expression, free association, freedom of speech, freedom of religion — all these things are under threat when you allow four technology companies to control what people are allowed to say, and if we don’t figure that out long term, we’re going to have real problems in our Constitutional Republic.” 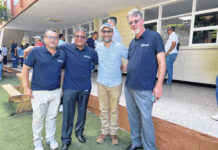 Milligan elected board president of CUR