GREENVILLE — A man arrested for murder appeared in court for an initial appearance on Monday. Judge Jonathan P. Hein presided.

Eric J. Martin, of Dayton, appeared in Darke County Common Pleas Court via video conference with the jail for the murder of Layton White, 29, of Union City, Ind. on Sunday night in Gettysburg, Ohio. He was apprehended in Troy, Ohio, hours after the incident.

“His flight from the scene causes me concern about the proper amount of bond and whether Mr. Martin would appear voluntarily,” Ormsby said. “I’m also concerned for the public’s safety.”

Eyewitnesses reportedly observed Martin shoot White on Sunday before fleeing the scene. Martin tried to explain his actions while stating why he would not be an issue if released from the jail.

“I’m not a flight risk,” Martin said. “Obviously this is a serious charge, but I wasn’t clinging to the intent of leaving. I left the scene to turn myself in in a different county because I’ve had problems with the way some officers view me in Darke County.”

Judge Hein cut Martin off before he could go into any facts regarding the case and set bond for $150,000. If and when Martin posts bail, he will be restricted to house arrest with an ankle monitor, and he is restricted from having any contact with the victims.

The court appointed attorneys Alex Pendl and Nicole Pohlman to represent Martin. His arraignment date is set for Jan. 20.

Two more people appeared in the Common Pleas Court for initial appearance via video conference, and one was sentenced.

Caitlyn Collins, 21, of Eaton, appeared on three-count indictment: count one is breaking and entering, count two is possession of criminal tools, and count three is theft, all of which are felonies of the fifth degree. Collins faces up to 12 months in prison and a $2,500 fine on each charge, all of which are not mandatory. She was granted an OR Bond and will need to return for arraignment on Jan. 20.

John M. Albert IV, 31, of Eaton, appeared for a three-count indictment: count one of breaking and entering, count two of possession of criminal tools, and count three of theft, all felonies of the fifth degree. Albert faces up to three years in prison and up to a $7,500 fine, all of which are not mandatory. He was released on an OR Bond and given the arraignment date of Jan. 20.

Anthony B. Madden, 22, of Greenville, was sentenced on one count of receiving stolen property, a fourth-degree felony. Both the state and the defense attorneys agreed addiction is the main issue in Madden’s life and work should be done in order to help him heal from the substance abuse.

“If he doesn’t get help, he is either going to spend a lot of time in prison or die young is what I fear,” defense attorney Dave Rohrer said.

Judge Hein sentenced Madden to 61 days with 61 days credited, up to 60 months of community supervision, 100 hours of community service, and insisted he complete day reporting. 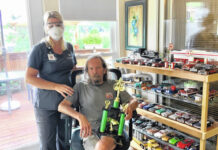