Officers of the Union City Ohio Police Department were dispatched to the 400 block of E. North Street in reference to a male that had been shot. The suspect, Simon Jennings, reportedly fled the scene.

Moments later, a 911 call was received reporting that a male subject had crashed his vehicle in the 700 block of Lynwood Court. After crashing his vehicle, Jennings fled from the scene, and he was chased down and detained by a bystander and witness of the crash.

Upon officers arriving, Jennings told officers that he just shot another male in the 400 block of E. North Street. Jennings was taken to Wayne HealthCare Emergency Room for treatment from injuries he sustained from the altercation and injuries from crashing his vehicle.

The victim of the shooting was initially transported to Wayne Health Emergency Room and then transported to Miami Valley Hospital, Level 1 Trauma Center for further care. 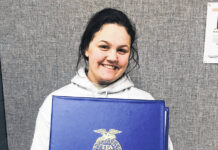