The program had their second straight “Midnight Madness” event. The team was introduced in front of family and friends to kick off the season. Head coach Dave Ernst said the event serves as a reminder to the team that it’s time to go to work. He also wants to build up some hype for the upcoming season.

“That’s the goal, to make this a big deal. And to let the girls know this is when the season starts and now we’re serious. (We want) to build some excitement; hopefully parents and family come,” Ernst said. “It’s for the girls to know that summer is over, now it’s time to work.”

Captains were also announced during the event. Senior Lilly Lowe and junior Kaelyn Gump were named captains for this year’s team. For Lowe, she said it was important for her to be a captain for her last year at Greenville.

“I wanted to show the girls what you have is what you have, take that time to enjoy it while it lasts. It was hard to walk out here tonight and know it was the last time,” Lowe said.

Lowe also said it’s an honor to be able to lead this group of girls. Gump shares the same sentiment as Lowe.

“It’s an honor because we can take control of the team; we showed our leadership,” Gump said.

After the introductions, the team had a short 40 minute practice. They did a dribble and shoot drill followed by a scrimmage. The scrimmage provided the team with more competition after they had played against the girl’s alumni team on July 30.

Ernst is excited to get the season going. He said the speed and athletisim on this team could make for a quick and exciting offense.

“The transition from defense to offense, the quicker you can do that the more you can catch the other team off guard,” Ernst said. “We’re going to be able to run with anybody we play. If we gel in the center of the field, we should have a great year.”

The girl’s season will start on Aug. 12 when they travel to National Trail High School. 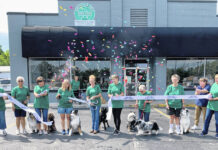