GREENVILLE — Bradford man is placed on an alcohol monitor.

Douglas Allan Stone Miller, 36, of Bradford, appeared in the Darke County Common Pleas Court on an operating a motor vehicle under the influence charge, a felony of the fourth degree. If found guilty, he faces a minimum mandatory 60 days in jail and a maximum of up to 30 months in prison. He also faces a minimum mandatory fine of $1,350 and a maximum of up to $10,500.

State Prosecuting Attorney Riley Green said the defendant is out of control while discussing bonds.

“He says he used to be a bad alcoholic, but he still is. He needs to get a handle on his problem before he hurts himself or somebody else,” Green said.

Green suggested the court consider finding Miller an inpatient treatment program in order to help with his addiction in addition to jail time. Miller’s only request was he be granted a personal recognizance bond in order to work and find a lawyer. Judge Hein told Miller it was better that he was not caught driving while intoxicated instead of being caught sleeping it off in his car.

Judge Hein granted Miller a personal recognizance bond and put him on an alcohol monitor ankle bracelet for better pretrial supervision monitoring. Part of the pretrial stipulations is there is no participation in alcoholic or illegal substances, so this is a way for them to better retrieve data from Miller’s lifestyle. Miller’s preliminary hearing is set for Oct. 4.

Joseph W. Braun, 52, of Greenville, was arrested as a fugitive from justice. Braun is wanted in the Wayne County Supreme Court in Indiana. Braun admitted to getting an email from the court a while back, and he was going to turn himself in the day before his arrest once he got out of Recovery and Wellness, but claims it was too late to go because the individual who was going to take him to the court has daylight driving restrictions due to his age. It was determined that Braun was not going to fight the charges and would be willingly transferred to Indiana to face the charges over there.

Holly R. King, of Parker City, Ind., appeared before the court to motion for an ILC program for the sole charge of possession of a fentanyl substance, a felony of the fifth degree. The offense date was Sept. 28, 2021, and she faces a maximum of 12 months incarceration and a $2,500 fine. King’s next court appearance was reset for Nov. 7 in order to have better pretrial supervision notes, and to give her a chance to understand what the ILC program is. 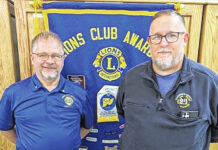