GREENVILLE — Kenna Jenkinson had a room full of support when she signed her Letter of Intent to further her golf career with the University of Cincinnati (UC). The support was nothing new for the golfer that was able to capture nearly every Greenville High School record over the course of her career. The records started falling before she even stepped foot in the classroom.

On the day before Thanksgiving, Jenkinson showed she had a lot to be thankful for. Wearing UC colors, the future Bearcat shared the moment with family, friends, fellow golfers and even her teammates and coaches from a different sport, Lady Wave Softball. For over a half hour, Jenkinson thanked, hugged and posed with pictures with everyone in the room.

Jenkinson said, “I’d like to thank everyone for coming out. It means so much to me.” She reiterated those feelings when asked about what she will remember most about her high school career. “I’m going to remember my support system here. Everybody here has always supported me so much. I always get so many text messages and phone calls from my family, my peers, and my advisors at school.”

Her high school coach, Tracy Haines, was a witness to the support system at nearly every match. She noted there were 13 or 14 golf carts following her around on the course. “It encouraged the other parents to come out. She had the support of the community. Some weren’t even family. I had friends that would come out. She’s a joy to watch play. She’s fantastic.”

Jenkinson also acknowledged the turnout at golf matches, “I couldn’t have done it without my family and my big support system. They come to all of the matches. I always have somebody at my matches. You can always tell they are there because of all the carts following me and the loud voices screaming and hooting and hollering.”

Haines pointed out Jenkinson was “easy to coach.” She said, “She had her private swing coach (Tim Lambert), and private short game coach (Brad Smith). She did all the work before she came out to practice. When she came out to practice, she knew what she needed to do. She also helped the other girls.” Greenville’s head coach shared that Jenkinson was a leader in practice and on the golf course. “They looked up to her and she helped them out,” Haines said.

Jenkinson will be leaving Greenville High School early so she can work to reach the goals she has set for herself at UC. “I want to be able to travel with the team my first year at Cincinnati. I believe if I work very hard down in Florida for four months over this winter and train my butt off that I can crack the lineup and travel with the team.”

The Greenville High School record holder said she didn’t start playing until she was 13 years old, but she saw her parents and the other golfers at the course and knew this is what she wanted to do for the rest of her life. Her first swing coach, Lambert, began helping her and she eventually added a short game swing coach in Smith. Lambert has helped several other D1 and pro golfers. Smith was previously an assistant coach for UC and introduced Jenkinson to their head coach.

Corey Jenkinson, Kenna’s father, pointed out that after they visited the campus and program on an official visit, Kenna knew that is where she wanted to go. He said she was originally leaning toward a school in the south so she could work on her game year-round. Kenna’s parents, Corey and Christi are both proud of the hard work she has put in to get to this moment. They also are happy with her choice of schools. While they realize they won’t be able to get to all of her matches, since most will be scattered throughout the south, Corey realizes that Kenna is going to need a chance to get away every now and then. “It’s going to get tough for her, but it’s also going to be nice if she has a weekend off to let us feed her for a weekend, come home. If she went to one of the schools down south, she wouldn’t have that option.”

Kenna’s advice to young girls wanting to play golf, “Stick with it and keep a positive mindset. The mindset is the main part of the game.” 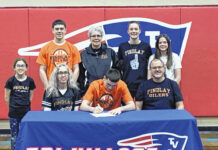 Justin Finkbine to further his football career at Findlay