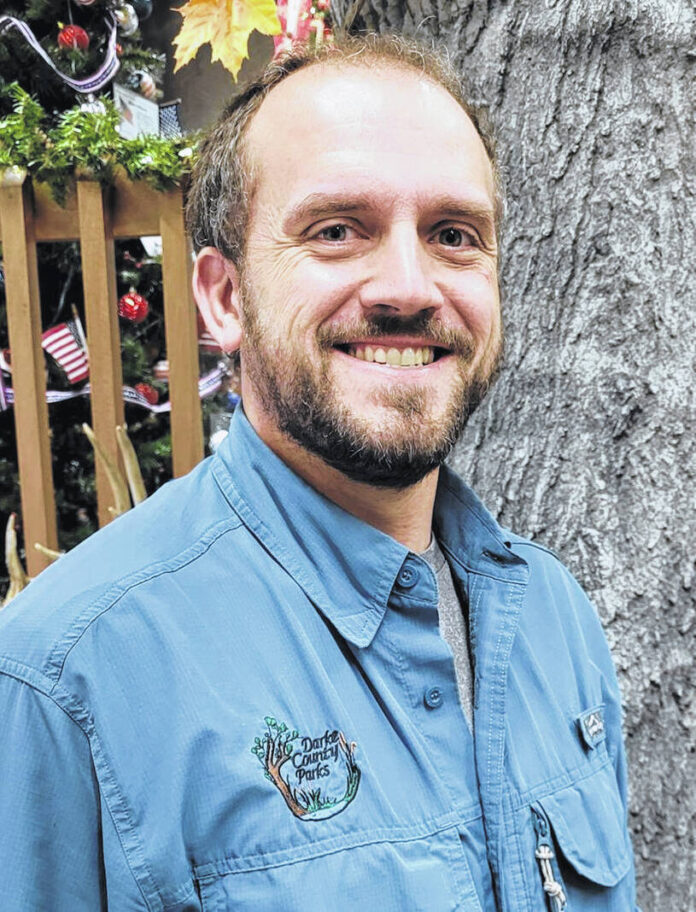 It’s the Holiday Season and we’re quickly approaching Shawnee Prairie’s annual “Walkin’ in a Winter Wonderland” luminary event! When I started full-time with the Park District in 2007, I expressed a desire for a luminary event during our august planning meeting. Before I knew it, I was asking for hundreds of milk jugs & votive candle donations! With around 200 luminaries created, we succeeded in the event’s goal of “a peaceful start to the holiday season with a walk in the woods.” We gathered a few volunteers, and some staff, and the event was successful with participants asking if we needed more luminaries to grow the event for next year!

Over the next couple of years, the number of luminaries and trail length doubled. New activities were added to the event while still working to maintain the event as a “peaceful” event (for the public and staff that plan it). With nearly 400 luminaries, cookie decorating, and Santa(!), the event was taking shape. We averaged several hundred people moving thru the trail over the course of three hours. Not bad!

As 2017 approached, we were planning our 10th anniversary of the popular event and brought the luminary numbers to nearly 700. In addition to more lights, we added activities in both the Log House area and the Nature Center, adding more trail options for those that wanted to walk longer, marshmallow roasting, and campfires to warm by.

In 2019, we went viral. Our Facebook post for the event reached over 276,000 people and 15,000 people interested in the event across the region! We had over 650 vehicles officially registered (more attended) and 1,300-2,600 participants expected! Needless to say, it was all hands on deck as we prepared for this huge influx of people… again over just a short 3 hours. Thankfully, while very busy, the event went very smoothly thanks to the amazing volunteers of Darke County Parks and our small staff.

And it may have even still been a “peaceful” night…

Enter 2020. As we all stumbled thru the year, we approached the winter planning with the question: “can we offer the luminary walk”? After what felt like 27 different plans, we decided on a driving tour.

While we didn’t have a lot of space for a driving loop, we felt it was vital we offered the community something positive. We purchased, borrowed, and built a variety of holiday decorations that we could surround the hillside of the Nature Center in, brought in volunteers and staff in costume (spaced safely away from each other), and instead of a single night for 3 hours increased the event to three nights.

And something entirely new for this event… electric Christmas lights. Staff also prepared take-home craft kits for the first 60 kids each night; these went fast! The first evening we had a healthy number of vehicles move thru the event. By the third and final night, we had to open early due to the amount of traffic backing up on 502 and traffic safety concerns. While our tiny hillside wasn’t as fancy as many others and bumper-to-bumper traffic occurred, we were pleased to offer something so bright in a dark time.

After the introduction of holiday décor in 2020, we didn’t waste the investment, so the event evolved to its current edition. We still are proud to offer nearly 700 luminaries, over 100 “woodland spirit lights” and now several locations of Christmas lights decorating the Log House, Blacksmith shop, and “Candyland” by the Sugar Shack. The event has grown to accommodate 600-900 participants on average and still maintains its peaceful atmosphere.

Over the past 15 years, we’ve experienced temperatures in the teens up to the 60s, rain, sleet, ice, and snow, and attendance of a couple hundred to over a thousand in just three hours. This year’s event, December 3rd is just 10 days away (as I write this) and we look forward to another evening in the woods as we welcome December and all that comes with it. We look forward to seeing you there and say “Hi” if I see you on the trails. This is still my favorite event that I get to organize and it still ushers in the Holiday Season with a peaceful walk in the woods.