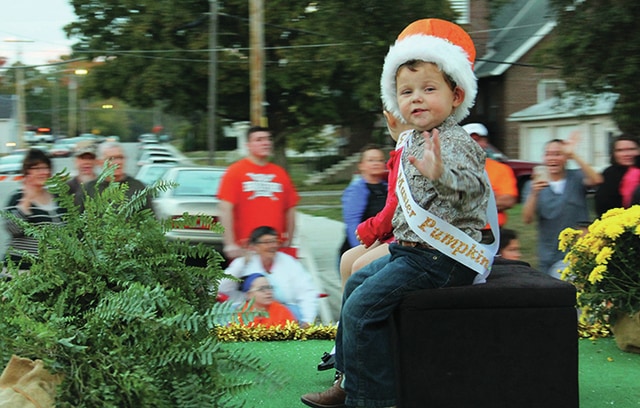 BRADFORD — A beautiful October sky of bright oranges and reds casted over the 2015 Bradford Pumpkin Show on Thursday evening, with many visitors lining the street to watch the marching band parade.

Besides the food, rides, and parades, the Pumpkin Show is also known for the Prince and Princess Pageant, as well as the Queens Contest, all of which took place earlier this week.

And who can forget the rain of confetti?

Jim Wysong, president of the Pumpkin Show, said the festival is going well this year.

“So far it’s going good,” he said on Thursday. “Everyone (the vendors) that we have talked to have said their stands are going good.”

Wysong also mentioned the number of marching bands participating in the parade has nearly doubled this year, with 10 different school marching bands. There were also seven schools and 11 teams that were in the Pee-Wee Cheerleading Competition that performed at the Bradford Fire and Rescue building Thursday night.

The festival brings a variety of people, some of whom are Pumpkin Show veterans and others who are newbies.

For 37 years, Robert Jess has seen his street full of food vendors and people from his own window. He mostly eats at the festival during the week; he said it “saves him groceries.”

He comes for more than just the food, though.

“It’s just been a local thing I grew up with from 5 or 6 years old,” he said. “You see people that you don’t see for a whole year … people you grow up with that don’t live here any more and they all come home for this.”

Cassie Gantt, of Arcanum, originally from Piqua, brought her children, Madelaine, Maureen, and Murphy, to enjoy the parade on Thursday.

“(The Pumpkin Show has) always been a favorite since I was a teenager and so I brought them,” Gantt said.

There is a calling to add more cars to the car show that will be held on Saturday. Anyone interested can enter their car the day of the event from 9 a.m. to noon. The show starts right after noon.

The festival started on Oct. 6 and will continue onto Saturday.