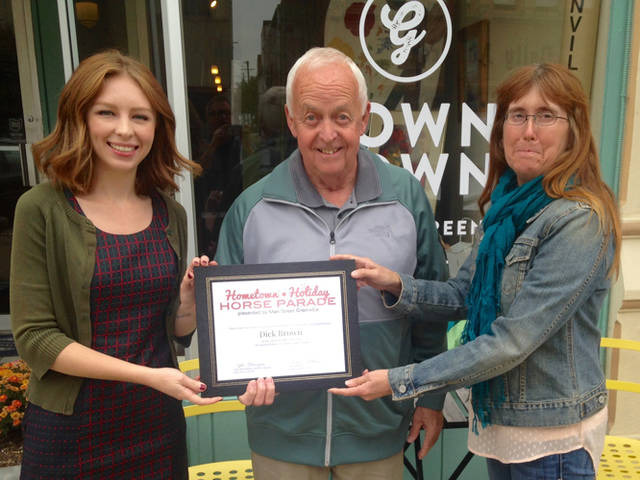 GREENVILLE – Main Street Greenville’s Board of Directors and the Horse Parade Committee have named Dick Brown, president of the Greenville High School Alumni Association, as the grand marshal of the 2018 Hometown Holiday Horse Parade.

Brown initially was selected as the grand marshal for the 14th annual event, but due to the cancellation of the 2017 parade the committee chose to extend the honor for a second year.

“We felt that in order to properly honor Dick and thank him for his service to the community he should get the full experience of being grand marshal,” said Crysta Hutchinson Bloomingdale, executive director of Main Street Greenville. “Dick has contributed so much to the schools and the alumni association over the years, and his spectacular Christmas displays are a shining example of small-town hospitality. We are thrilled to have him as the grand marshal for the 15th year of this beloved tradition, and we are looking forward to a fantastic parade.”

Brown was born and raised in Darke County and graduated from Greenville High School in 1964. He then went on to Miami University and graduated in 1968. He briefly worked at Pratt & Whitney after college before buying McVay’s Sporting Goods. After McVay’s, Brown worked as a real estate appraiser for Greenville Federal.

Many local natives may also know Brown for his Christmas light display. The decorations have drawn people from all over the area to the Browns’ home for the past 25 years.

As the tradition enters its 26th year, anyone who has experienced the exhibit before will tell you that it is more than just a display. The Browns also open their door to greet visitors and hand out thousands of full sized candy canes to those who stop by.

Brown married his wife, Diane, in April of 1975, and they settled in Greenville not long after. They have two daughters, Brandy and Betsy, and two sons-in-law, Josh Hill and Kraig Reiber. The Browns also have an 18-month-old granddaughter named Hazel.

Dick and Diane Brown are members of First Presbyterian Church, and Dick Brown previously served on the board of trustees for the Garst Museum.

In their spare time the couple enjoys traveling, working on projects and spending time with their friends and family.

“Mr. Dick Brown is an outstanding man,” said Laura Bemus, assistant superintendent for Greenville City Schools. “He has dedicated time and effort in attending school district events and photographing memories of a lifetime. We appreciate him and his work in truly making a positive difference for generations of Green Waves.”

through stimulating and supporting revitalization efforts, historic preservation and economic