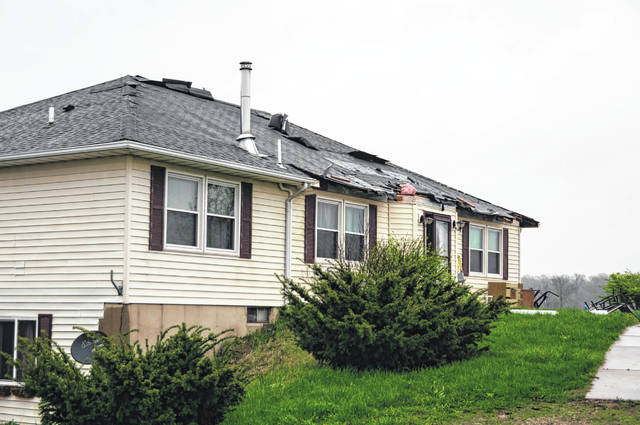 DARKE COUNTY – Heavy storm damage has been reported across northwest and central Darke County as a result of a storm system that passed through late Thursday night.

Among these are reports of heavy damage to a residence in the 700 block of Greenville-Nashville Road that left a 30-foot porch torn from and lifted over a house scattering debris across the property and hanging in trees.

Jim Cantrell, who resides on the property along with his wife, mother and sons, stated that there were no injuries involved in the incident however, the damage to property is extensive.

Crews had spent the early morning hours on Friday cutting down and removing debris as well as repairing power lines in the area of State Route 502 and Hillgrove-Southern Road.

Representatives of the Dayton Power and Light Company, as well as Darke Rural Electric, estimate that several hundred people were left without power throughout Darke County due to the storms.

The National Weather Service out of Wilmington, is expected to meet with Darke County authorities and conduct a damage survey to determine if a tornado did indeed occur.

More details on the situation will be released as they become available.