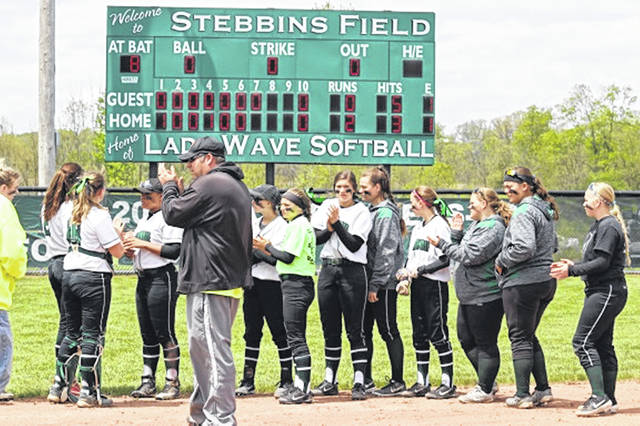 GREENVILLE – The Lady Wave made the most of four hits while shutting out the West Liberty-Salem Lady Tigers 2-0 in a Saturday afternoon non-conference game before a large crowd at Stebbins Field, home of the Lady Wave.

“Beautiful day out here at the stadium,” said Greenville coach Jerrod Newland. “Stebbins Field is hopping, little kids playing, my daughter is getting ready to play out here. Just a fun day and just a good day for the softball team – playing some good defense out there, struck the ball and put it in play.”

“Two crisp teams and goodness, eight, nine hits in the game,” continued Newland. “Not many there and we played some pretty good defense, scratch free there and when we play defense and pitch like that and get outs we’re a neat little group.”

Greenville sophomores Grace Shaffer and Kennedy Fashner combined on a five hitter to earn the win.

The Lady Wave took advantage of a dropped third strike to open the bottom of the first followed by a Lani Shilt single to center moving Morgan Gilbert to third with no outs.

Natea Davidson drilled a sacrifice fly to deep left scoring Gilbert with the game’s first run sending the game to the second inning with Greenville leading 1-0.

Greenville took advantage of a high noonday sun to plate its second run of the day with a two out sky-high infield popup off the bat of Shaffer to score courtesy runner Saige Fellers, running for Chloe Sowrey who had just knock a two outs bases empty single to keep the inning alive.

“Bats get going, get things going and get one there in the first and came back in the fourth,” said Newland. “Left a handful on there today but bottom line is 2-0 shutout win on home field against a decent team and moving on to next week.”

The 2-0 Greenville lead after four complete would close out scoring on the day to give the Lady Wave the win and improve to 24-4 on the season.

Grace Shaffer went 1-2 with a RBI and Natea Davidson accounted for a RBI.

Grace Shaffer earned the win for Greenville pitching 5.1 innings of shutout ball, allowing four hits while striking out four and walking one. Kennedy Fashner threw 1.2 innings in relief giving up one hit, no walks and striking out one to record the save.

“Tuesday an opportunity to move on to get our 16th district championship in the last 17 years,” Newland noted. “Tuesday we play a great Franklin team and a great coach. Tuesday we’ll get on the bus and go down to Bellbrook and hopefully Lady Wave Nation starts the tournament trail and gets down there and go play some softball. Excited for the week and sectional championship Tuesday and opportunity to win that and play Saturday for a gold medal – can’t wait for that opportunity.”

“Lani Shilt with three (district championships) and can’t wait to get her fourth,” added Newland. “All year 24-4 and the only thing I care about is next week. I’ve had them for 12 weeks and the only things I worry about are the next two weeks. Next week is District Week and the next week is Regional Week, so we are going to sharpen some things up, get sharp, have some fun and hopefully the ball hops our way because we are due to catch some breaks.”

“Beautiful,” Coach Newland said of the large crowd of supporters. “I counted at the end and there was 111 people from the end of the right field foul pole to centerfield in the trucks. That’s a 111 people that weren’t even up there (in the stands). The stands were packed. Just a good atmosphere and when two good teams play and the sun is out, everybody likes to come out and watch good things and today at Lady Wave Stadium there was a good turnout for Greenville kids and just a fun atmosphere.” 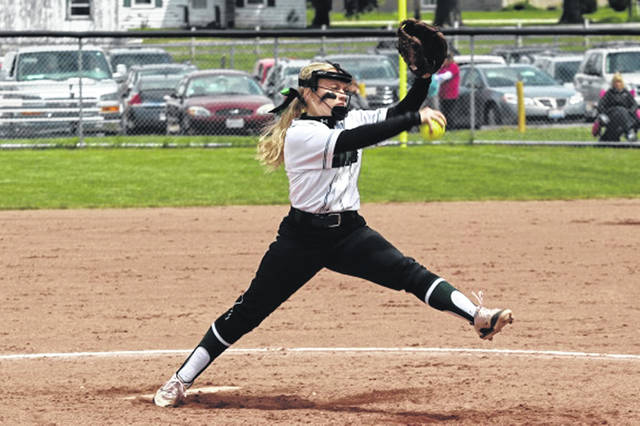 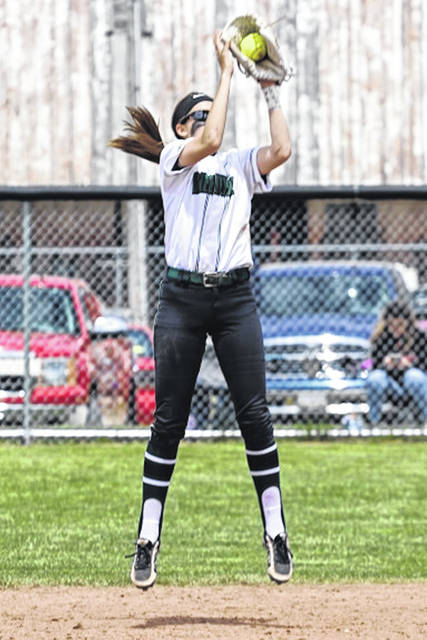 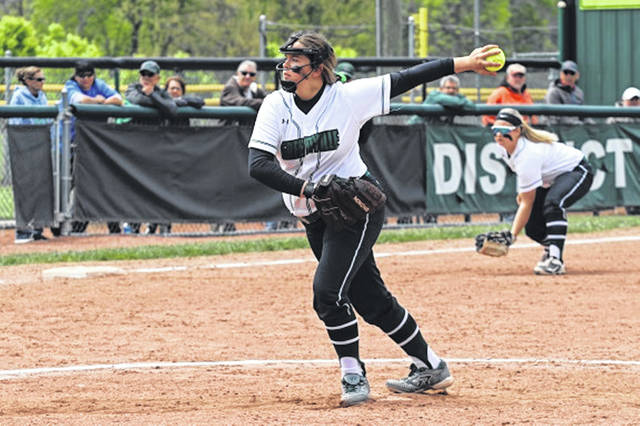 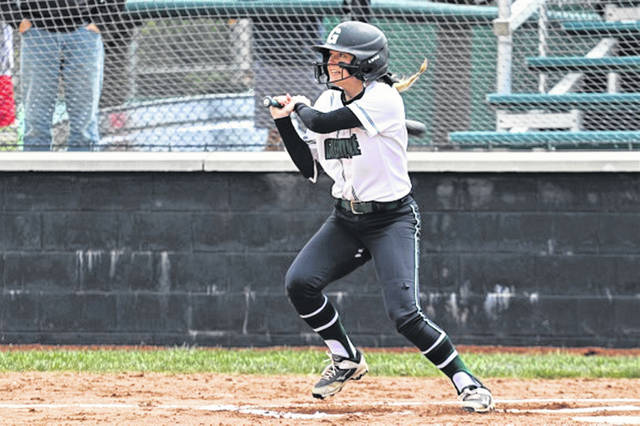 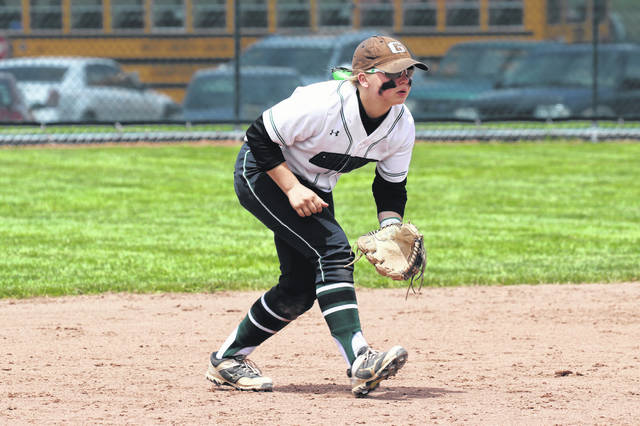 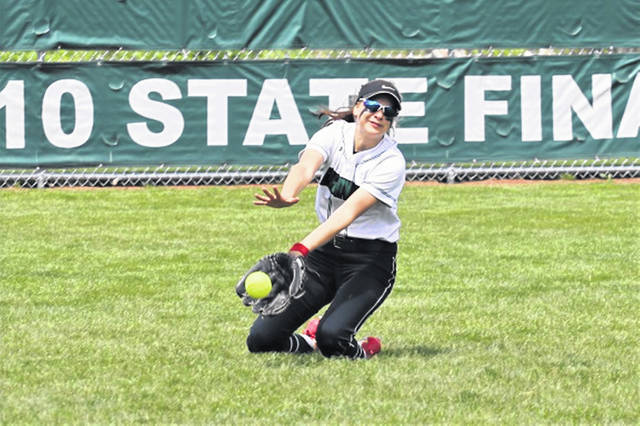 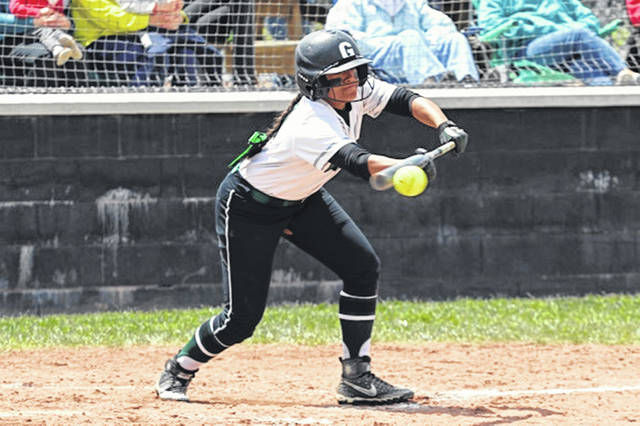 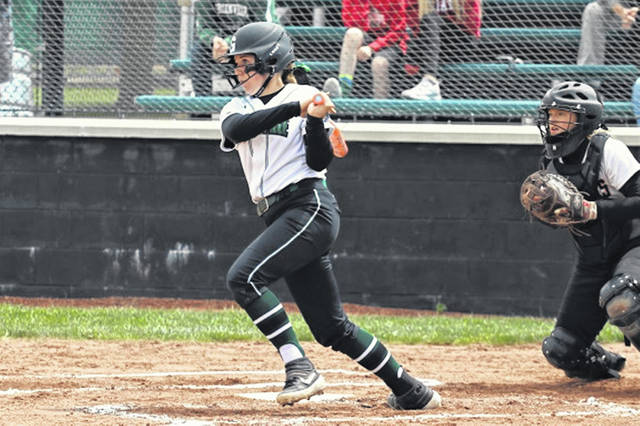