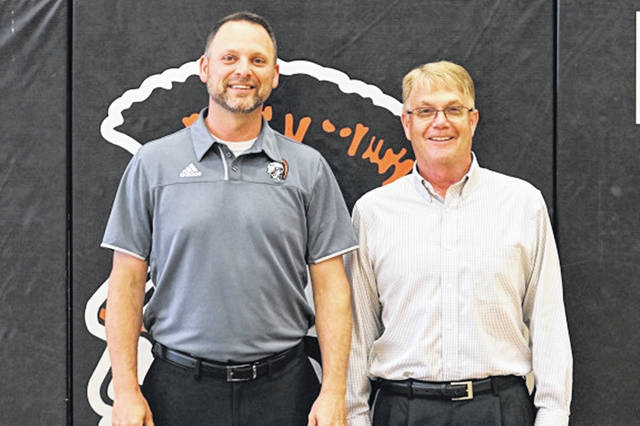 “A majority of our members have been around this community for a while,” said Arcanum-Butler Superintendent John Stephens. “We’re excited about the opportunity to bring Roger back. That was an easy decision for them all.”

“I am really excited about coming to Arcanum,” said McEldowney. “I have known John a long time. It is going to be a pleasure to work for him and Jason Stephan (high school principal) as well. I’ve known Coach Schondelmyer (athletic director) a long time too. I’m real excited to work with those guys and the kids here at Arcanum.”

McEldowney will return to the classroom at Arcanum-Butler while leading the boys basketball program.

“There is a lot of tradition here,” McEldowney said. “I think kids take pride in what they do. I’m looking forward to getting in here and working hard with them. I pride myself on taking the talent we have and trying to get the most out of it and that is what we are going to try and do here. Hopefully that leads to a lot of success.”

“I’ve known Coach McEldowney for a number of years now,” Stephens stated. “His kids always want to work hard for him and I think that is what is going to be the greatest asset; his passion for kids and kid development. Not just player development but the development of young men. He brings that to the table and we’re excited to have him back here in Arcanum.”

McEldowney tabled his high school coaching career to focus on his duties as Versailles High School Principal, but was able to continue coaching AAU summer basketball.

“Going into administration, it takes up so much time,” said McEldowney. “I just felt like it was right to focus on that position and that is why I got out of coaching.”

“I still coach my daughters in AAU,” continued McEldowney. “I felt like Jackie (Stonebraker) and Travis (Swank) at Versailles were able to bounce things off me so I was still able to kind of stay attached to them a little bit. I always missed it, always thought maybe when I get to this point in my career I might be able to get back into it, and then having the opportunity to do it here at Arcanum is just really exciting for me.”

Stephens took a moment to reflect on his time learning under Coach McEldowney as a young Trojans basketball player.

“Coach McEldowney tore down my shot,” said Stephens. “I wasn’t much of a shooter in junior high school and I remember him encouraging me the fall of my freshman year to work hard. We tore down my shot and started from five feet out, ten feet out and once I was able by the end my freshman season, he might have let me shoot a couple threes, but I wasn’t shooting threes until then so I joke with my son – your shot is because of Coach McEldowney because I taught you what he taught me.”