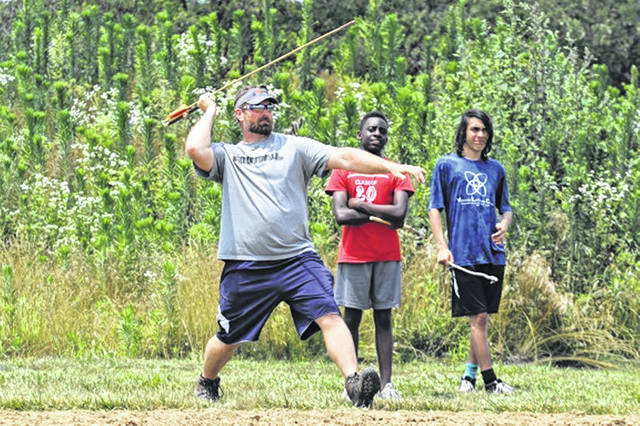 GREENVILLE – The Light Foundation completed a 10-day leadership camp for select at-risk youth from across the country on the foundation’s 400-plus acre Greenville facility, Chenoweth Trails.

“These guys have really worked hard,” said Matt Light. “I am proud of every one of them.”

“This has been our best camp,” Light said. “We have a group of guys that are unbelievable. We introduced five new guys from the DC area. They fit in great so far with everybody and they have done a great job.”

Camp Vohokase is a four-year summer camp taking 16 young men from “at-risk” areas across the country and brings them together to learn leadership, accountability, hard work and ethics. The Light Foundation team guides these young men throughout their entire high school career.

When young men complete the four years of camp, they graduate with the lessons they’ve learned and the skills they’ve acquired. Light hopes they pay that experience forward by carrying on the torch of leadership within their own communities.

This year, the new group of campers are from Washington D.C., while The Light Foundation has drawn campers from across America – Ohio, Rhode Island, Massachusetts, Louisiana, Indiana, and Tennessee.

The boys are exposed to outdoor activities they likely don’t see in their hometowns – hunting, fishing, archery, paintball, dirt bike racing and ropes courses. They also participate in daily group workouts, career education tours, nightly “fireside chats” to discuss goals and expectations for the summer and their lives moving forward, and engage in community service projects.

“These guys have done an amazing amount of work here with their camp projects,” said Light. “They made an incredible rope swing over at the pond. They have a lot of fun doing those things and then just dealing every night with our fireside chats and getting to know each other, pushing each other and working through all types of team building exercises.”

This year, the campers went to the Greenville Park to spread mulch and clean up the park as part of their mission to give back. The group visited JAFE Glass and Mid-Mark for career tours.

“They did a great community service project on a very hot day,” stated Light. “They decided to stay an extra hour to get the entire playground mulched over at North Park.”

“We have done some amazing career tours,” Light added. “We spent all day yesterday at Mid-Mark. They walked us through the entire production process and how they work their model from job training and everything else. We also had a great career tour at JAFE Glass.”

This year, Camp Vohokase will graduate a class of four young men from New Bedford, Massachusetts.

“We are about to not say goodbye, but say congrats to the four seniors who are graduating,” Light stated. “They have been a part of this camp for the last four years, they are from Bedford, MA, and these guys have really left their mark on this camp and this group. They have been a great role model for these young guys that have come in, the guys that are going to be around, so very thankful for what they’ve done for this camp.”

“The decisions that these young men made at this camp and the decisions they make in the future – I think we will all be proud of them,” Light Concluded.

The Light Foundation was established in 2001 by 3-time Super Bowl Champion and 3-time Pro-Bowler Matt Light.

Matt Light received the third New England Patriots Ron Burton Community Service Award in 2005, in 2008 Matt was presented the President’s Volunteer Service Award for his outstanding work in the community by the Bush administration, and in 2018 Matt was inducted into the Patriot’s Hall of Fame…. Since its inception in 2001, the Light Foundation has raised nearly $6 million for various programs and initiatives.

The Light Foundation received a generous grant from the Friends of the NRA Foundation including several guns, and two clay pigeon throwers as well as other shooting accessories such as sun visors and ear muffs, which has allowed us to add this activity to some of their programs and events at Chenoweth Trails going forward.