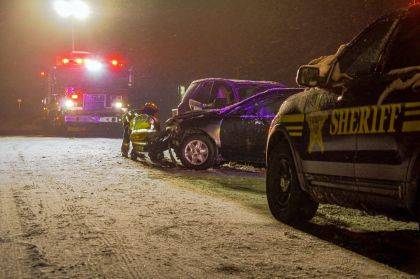 GREENVILLE – Hazardous road conditions Monday evening may be to blame for a crash that left one person with non-life threatening injuries. At approximately 7:34 p.m., Darke County Sheriff’s Deputies along with Greenville Township Rescue and Greenville Township Fire Department responded to the 500 block of Eidson Road on a two-vehicle injury accident.

According to the Darke County Sheriff’s Department, a preliminary investigation into the incident revealed that a black 2004 Saturn Vue, driven by Justin Strickland, 28, of Greenville, was traveling east on Eidson Road. The driver lost control of the vehicle, causing the vehicle to slide sideways into the path of a black 2004 Honda Civic, driven by Bradley McDonald, 41, of New Madison.

A female passenger of the Saturn, Karlisa Ditty, 29, of Greenville, was treated on the scene by Greenville Township Rescue prior to being transported to Wayne HealthCare for non-life threatening injuries. Mr. Strickland was cited for Failure to Control and Driving Under Suspension.