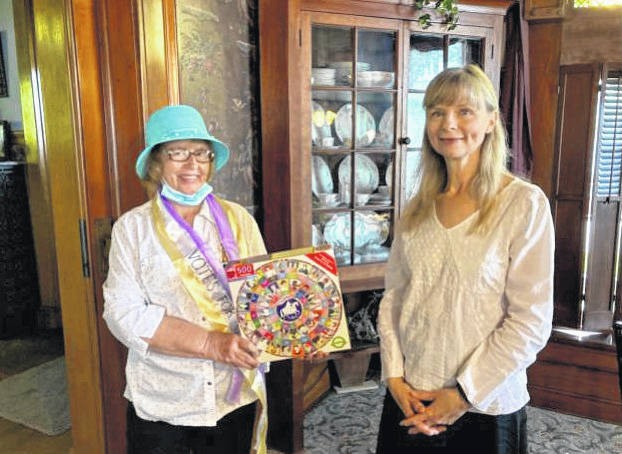 GREENVILLE — The local Darke County chapter of the Daughters of the American Revolution (DAR) celebrated the 100th Anniversary of the passage of the 19th Amendment with an enlightened program presented by Holly Finnarn of the Darke County League of Women Voters (LWV).

Finnarn’s talk was from a study she just completed entitled “The Struggle for Women’s Representation by the Ballot and the 19th Amendment” which chronicles the long history of the struggle for women’s suffrage. She noted that many people today do not realize the sacrifice of the bold and strong women that fought for a woman’s right to vote.

Finnarn, a founding member of the local LWV back in the late 1970s, highlighted the various heroes in the struggle including but not limited to: Elizabeth Cady Stanton, Lucretia Mott, Sojourner Truth, Susan B. Anthony, Alice Paul, and Carrie Chatman Catt, and noted that the quest for women’s rights was rooted in the anti-slavery movement in England and the abolitionist crusade prior to the Civil War in the United States.

Most interesting to the DAR was the description of the famous “1913 March on Washington D.C.,” when suffragettes were spat upon, called insulting names and had to narrow their formation to single file to proceed through the hostile spectators. They finally ended their historic march, some battered and beaten, at the DAR’s Continental Hall. The 19th Amendment was ratified in the State of Tennessee by a one-vote margin on August 18, 1920, and became certified as the law of the land on August 26, 1920.

The League of Women Voters, the successor to the National Women’s Suffrage Association, was founded by Carrie Chapman Catt in 1920, and lives on to this day to secure the right to vote for all citizens and to continue the fight for women’s equal rights.