FFA members from all over the United States, Puerto Rico, and the Virgin Islands were in attendance. Versailles FFA traveled to the National FFA Convention on a school bus with the St. Mary’s FFA chapter.

At the convention, the Versailles FFA was recognized as a Three Star National FFA Chapter, the highest individual ranking that the National FFA bestows upon chapters. A special thanks to FFA Chapter President Dalton Hesson and FFA Chapter Secretary Elise George for representing Versailles as they received the award.

The Versailles FFA chapter also had the opportunity to compete in the National Environmental and Natural Resources (ENR) contest. The Versailles ENR team placed first in the state contest, allowing them to move on to the national competition at the National Convention. The team consisted of FFA members Caleb Kaiser, Jayden Groff, Kristopher Marshal, and 2021 graduate Alex Kaiser.

The team had to take a test, complete a team activity on waste management, evaluate soil, and complete a practicum on data interpretation, GPS navigation, and water quality. The Ag Comm team placed ninth in the nation and was rated a gold emblem team. Jayden was recognized on stage as the eighth-place individual. Congratulations to the Environmental and Natural Resources Team.

Along with the success of the Versailles FFA, there were the five American Degree recipients. The American FFA Degree is the highest honor an FFA member can receive at a National Level. Emma Peters, Deanna Hesson, Caden Buschur, Ian Gehret, and Austin Timmerman all received the degree.

A special thank you to TSC Distribution Center for supplying each FFA member with a metal tube, a hat, a nerf football, and a TSC ring toss. Most of all thanks to the Versailles Board of Education for allowing the Versailles FFA Chapter to participate in the National FFA Convention. 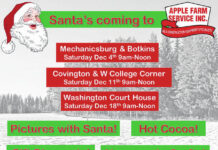