The Joyful Jets 4-H club had a meeting on Aug. 9, Trinity U.M. Church, starting at 6:30 p.m. They kicked their meeting off with a game of Simon Says, but instead of Simon they said the 4-H member says. This game was led by Isaac Wiant.

The meeting then officially began when called to order by Mariah Kreusch, the president. She then followed that with the pledges, and then the roll call. The treasurer’s report was read, motioned by Isaac Wiant and seconded by Brooklyn Miller.

The club discussed many things as we approached the fair quickly. One of the topics discussed was the Cloverbud Revue. All Cloverbud members are encouraged to model their projects at the fair on August 20th at 4p.m. in the youth building. Any members that are available at that time are encouraged to read cloverbud cards. Members can get involved by contacting Susan Peele. The second topic of discussion was the fair parade. The Joyful Jets will be the sixth float in the fair and will be meeting inside the grandstands at 9 a.m. All members are encouraged to attend and represent the club.

The last topic of discussion was the set up of the booth in the youth building. All members are welcome to attend and help set up the booth. They will be asked to wipe down things, tape pictures onto the backdrop, and many other tasks. This will begin at 6 p.m. on Aug. 15. If you are a member and do not attend, please make sure to bring your project the following night at the same time. With fair approaching quickly, all members are encouraged to stay on task and make sure that they are getting everything done. The Joyful Jets 4-H club wishes everyone a great fair week. 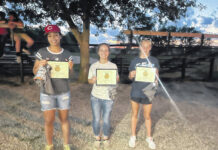 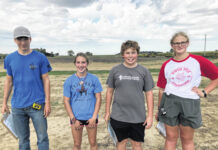