ANSONIA — Miss Rosemarie Cain, daughter of the late Lawrence and Norma (Gilbert) Cain of Ansonia, was united in marriage to Harry Edward Ellison, son of the late Eugene and Nellie Marie Ellison of Union City, IN, on Saturday, Aug. 26, 1972, at half-after one o’clock at the United Methodist Church in Ansonia. The double ring ceremony was performed by Reverend Michael Sims before an altar decorated with two baskets of white gladiolas, pink carnations, and baby’s breath. Two seven-branch candelabras were lighted before the ceremony. A prelude of music was provided by Mrs. Gary Middleton at the organ. The wedding party included Rebecca (Cain) Houser, Elizabeth (Cain) Clark, C. Kay Ellison, Norma (Cruze) Kammer, David Guinn, Jerry Ellison, Harold Rismiller, Ron Wills, along with Tonya Rismiller, niece, and goddaughter of the bride as flower girl and Dale Baker, nephew of the bride, as the ringbearer.

Together with friends and family they celebrated their 50th Wedding Anniversary on Aug. 27 at EUM Church in Greenville, with an open house, cake cutting, and anniversary toast. Their open house mirrored their wedding reception with the room decorated in the wedding colors of pink and white. The bridal table was covered with the white Raschel lace tablecloth over pink underskirt that was used 50 years ago. The table was centered with a replica four-tier wedding cake made by their daughter, Roseanne. Each layer of the cake was decorated with pink roses, green leaves and vines, scallops, and the original lace heart holding two gold rings. The bride’s Chantilly lace over angel-mist taffeta wedding gown with fitted bodice featuring a scalloped sabrina neckline studded with tiny pearls and long sleeves and a full bouffant skirt with cascading ruffles which swept to a cathedral train, was on display along with her fingertip length veil.

The Ellison’s have resided in Darke County since their marriage. Harry graduated from Union City Community high school and worked for Sheller-Globe Corp., Hardy Division, of Union City, Ind., until the plant closed, where he began working for Copeland in Sidney where he retired in 2005. Rosemarie graduated from Ansonia high school and Sinclair Community College and worked as a nurse, retiring in 2014 from Koester Pavilion.

From this union were born two daughters: Norma (Jacoby) Highley of Ansonia and Drs. Roseanne (Aaron) Scammahorn of Arcanum. They have two granddaughters, Reganne and Keelan. 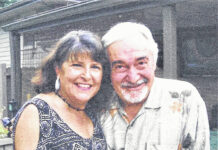 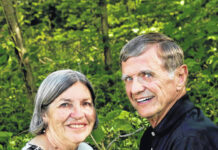 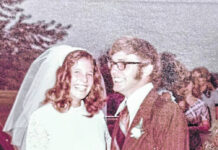