When he was drafted into the U.S. Army in 1965, little did Jerry Voisinet, of Piqua, know that he would end up in Vietnam as a tunnel rat.

At basic and advanced training at Fort Devens, Massachusetts, the oldest infantry base in the U.S., he was a member of the 196th First Light Infantry and was trained in riot control. He expected to be deployed to Puerto Rico – had been told to pack volleyball nets and swimming trunks – and had learned the strategies for riot control (similar to some used at the U.S. Capitol on Jan. 6, 2021, by those who were attacking the facility): how to use a baton (or a flag pole) and commands by leaders, “Move forward, V forward, wedge left, wedge right.” And he had learned as a member if the infantry what the terms “the old stuff”: living out in the field, bivouacking, and training with an M-14 rifle.

On the day before his two-week leave following his advanced training was to begin, he was told he was going to Vietnam. Voisinet reports that his family didn’t like it, but he felt, “It was my mission, and I didn’t fight it.” His family’s opposition was a result of their losses in World War II: His maternal uncle, Louis Monnin, died in the North African Campaign, and his paternal uncle, Tony Voisinet, died at the landing on Normandy Beach.

So two weeks later Voisinet departed aboard a Merchant Marine ship, the USS Darby, for a one-month voyage to Da Nang, Vietnam, where his company was greeted by a 20-piece band – hardly what the captain of his company had led them to expect. He indicates that the first day in the field was “crazy,” and he dug three foxholes. Why three? He kept being told they needed to be in a different location. Voisinet says he finally said, “Enough of this s—-.”

In Vietnam, he found ant hills that were six-feet tall and six-feet across at the base with red war ants that could “bite you up good, grab onto you, and you couldn’t wipe ‘em off. The only thing that worked on ‘em was mosquito repellent.”

After about a month or two in Vietnam, Voisinet was moved to a new company and was assigned to be a tunnel rat. At 5’ 8” tall, weighing 145 pounds and being physically fit (He was a tri-captain of the football team at Versailles High School in 1963; the year he graduated), his role was to seek out and destroy some things the Viet Cong were hiding underground. The extensive array of tunnels had been constructed initially to fight off the Japanese, followed by the French, and then the Americans. Of his new job, Voisenet relates, ”I was never trained, but someone had to do it, and I was that someone. I was only told to look out for tripwires. We tunnel rats carried a flashlight and a .38 caliber revolver or a .45, and I had a sergeant who was walking around Tay Ninh Combat Base with a .45 which he didn’t need. I did need it, and I got in a quarrel with him about it. I got his weapon, but I lost rank over the argument – from a Spec-4 to a PFC.”

He continues, “This same staff sergeant, Forrest Warren, lost one of his dog tags, and had a dozen of us looking for it. I found it, but never gave it back. I still have it.” And Voisinet riffled through his thick scrapbook and located it as proof positive of his story.

As a tunnel rat, Voisinet’s job was to blow up certain of his finds with a C-4 malleable explosive which he smashed against the wall of the tunnel and then inserted a blasting cap and a 12- inch Dep Cord fuse. After he lit the fuse, he had one minute to escape through the mouth of the tunnel. At times, he used a cigar instead of a cigarette lighter.

He relates his most exciting underground finds:

A hospital with 18 beds that had been vacated with IVs still hanging,

An arsenal of 145 Russian and Chinese weapons, AK-47s and assorted other devices useful in wars, and

An office with desks and five old typewriters in a room six feet high with six tunnels leading off it.

No doubt that Voisinet was a leader. He reports, ”I lost rank over the little incident with Warren, but in no time I was a platoon leader and a Spec-6. When they told me, I got her done.”

Soon his tour in Vietnam was almost over, and the custom was to not send soldiers into the field five days prior to their departure date. Voisinet, however, was asked by his commanding officer to go, and his response was, “Hell no.”

He says he had always dreamed of going home in a big commercial aircraft with pretty stewardesses delivering smiles and drinks (Yes, they were still called stewardesses back them), but that was not to be. The day he was to leave, he was told to grab his bag and board the Jeep that was waiting for him. And it was off to the Chu Lai Airport where he boarded a huge C-4-1 transport aircraft with seven other soldiers. Of that flight, he says, “We damn near froze to death and were served MREs.”

Accompanying Jerry and the seven soldiers were four caskets carrying the remains of U.S. soldier who had made the ultimate sacrifice.

When the aircraft landed at Long Beach, Calif., at 4:30 a.m., all was quiet and they were sent to the mess hall where African American military cooks called out to them, “How many steaks you want? How many eggs?” After breakfast, it was time for a physical examination, followed by out processing, and the issuance of class A uniforms. Voisinet was offered the chance to go to Germany as an E-6, and his response was, “No, thank you.” He took his pay of $780 in cash, sat on a bench at the base for five minutes to think about his future, then took a taxi to the airport and headed home to Ohio.

Voisinet says of his year in Vietnam, “They say a cat has nine lives. I spent five of mine there in Vietnam.”

PS: Voisinet joined the Ohio National Guard in Piqua and is a U.S. Army retiree. His son, John, 40, is a First Sergeant at that location, and his grandson, Jake, 21, will soon be deployed to Syria for nine months to train the military there in the use of artillery. 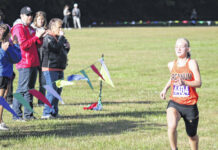