Johnny E. Dull, of Greenville, was granted into the ILC program for trafficking in or illegal use of food stamps, a felony of the fifth degree. Dull took his sister’s card and got $267.48 worth of groceries. Judge Hein said the legislature is making it easier to get treatment because they want to solve the base issues instead of using wrath to try and scare people into being good.

Dull was placed under supervision for up to 60 months, and he must pay restitution of $267.48. Failure to comply could result in up to 12 months incarceration and a $2,500 fine.

Josiah O. Randall, of Greenville, appeared via Zoom from Adam’s Recovery. He filed a motion to apply for ILC for two charges, both possession of methamphetamine, felonies of the fifth degree. State Attorney Jesse Green agreed with the defense for Randall stating they “would like to give him the opportunity to get a handle on his addiction.” Judge Hein granted Randall ILC for up to 60 months and ordered him to 100 hours of community service.

Zachary W. Lawrence, of Union City, was sentenced on the sole count of possession of drugs, a felony of the fifth degree. Judge Hein sentenced him to supervision for up to 60 months, and he ordered him to 100 hours of community service. Lawrence faced up to 12 months incarceration and a $2,500 fine, all of which were not mandatory.

Darnell Hicks, 47, of Greenville, appeared before the court for a domestic violence charge, a felony of the fourth degree. State prosecuting attorney Jesse Green advised the defendant was “drunk when the victim took a cigarette from him, and he hit her. It is not the worst case, but it is still domestic violence with previous convictions.” Green said Hicks needs forced sobriety in jail.

The court agreed it is clear Hicks has an alcohol problem, and Judge Hein sentenced him to local supervision for up to 60 months with 100 hours of community service. Failure to comply could lead up to 18 months incarceration.

Fisher is being accused of violating the conditions of the ILC by possessing a firearm therefore being non-compliant. If found guilty, he faces a max of 18 months incarceration and a $5,000 fine on count one and 12 months and a $2,500 fine on both count two and three for a total of 42 months and a $10,000 fine, all of which are not mandatory.

Fisher entered a denial and will seek out his own lawyer. His next court appearance will be Nov. 28. 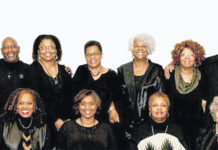